When Ryan Brenny sent the text, it was a rumor no one really knew how to confirm.

That's emblematic of how Dr. Richard Fayrer-Hosken lived his life. Sadly, confirmation of the death of our beloved club coach, lifetime member, and occasional sideline ER Nurse arrived through the university yesterday..."Fayrer-Hosken" has died.

Some of the details of this tragedy are still unknown. It appears, Coach hired a farm hand to help him cut hay last Thursday. Their work momentarily separated them from each other and when the boy returned, Coach was laying beside his tractor. Heart attack or maybe a stroke. No one knows. We believe he has a sister living in the states and we are not sure about other family. We don't know when or if he will have a memorial service but we know he died with is boots on doing what he loved to do and that's comforting.

To any of Richard's family who may find this announcement: on behalf of the entire UGA Rugby Football Club, we would like to express our sincere condolences to you and your family. We loved our Coach and he served us with passion, pride, and integrity. May he rest in peace.

Fayrer-Hosken took over the club In 1988. With already more than a decade under the belt, the club was peppered with what would become legendary players. Richard's teams of the late 80's were known for their toughness and their unrelenting style of smash mouth rugby. One player described his arrival: "He came out of no where. He organized us, focused us, and he made an immediate impact. His coaching was transformational and we loved him." Another player described him as "pivotal to the progress of the club as a whole."

Ryan Brenny was a rookie in 1988 and he recalled Richard's coaching style. "When it came to coaching, he wasn't a tactician, he was more like a Drill Sergeant. He taught us how to be tough first. Then he taught us the game. He was the coach we needed at that time." Ryan added "Every training started with the tradition of "running the hill" and Tuesdays were for fitness and drills while Thursdays were reserved for full contact scrimmages. "We loved it! We had 40 to 50 players at training...all fighting for their spot on the First XV each week...that's what UGA Rugby is all about" he concluded.

After listening to Ryan and texting with Hamp and a few other players from this era, I think it's fair to everyone involved to say Richard Fayrer-Hosken and his "tough but fair" style of coaching and leadership galvanized our young club and he gave us what every great team must have - an identity.

If "tough but fair" was his club presence, what was he like as a professional? By all accounts, he was a trusted expert with the real "hands on" experience it takes to achieve absolute credibility. He was a dedicated researcher, consulted for zoos all over the world, and worked in television. Always an advocate for animals and he worked to do what was right for them. One veterinarian described him as "an expert, with a charming British accent".

I honor of the memory of our fallen brother, may we never mutter the word "Zimbabwe" and in a tribute to our Coach correct anyone who doesn't refer to his homeland as "Rhodesia".

Goodbye for now, you total badass.

May you rest in peace.

1999 Theriogenologist of the Year

for Research in population control of the African elephant

for Immunocontraceptive Elephant ResearchSAAB Board Member

1992 Nomination for the Richard B. Russel Teaching Award

for Commitment to the Progress of the Club

The University of Georgia

234 publications in articles, abstracts, and books.

All Events on Hold

"Never Back Down" Released 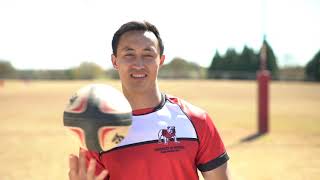 Congratulation to our 2019 Seniors